Family Trips to the Portuguese Fairyland
Portugal with Kids 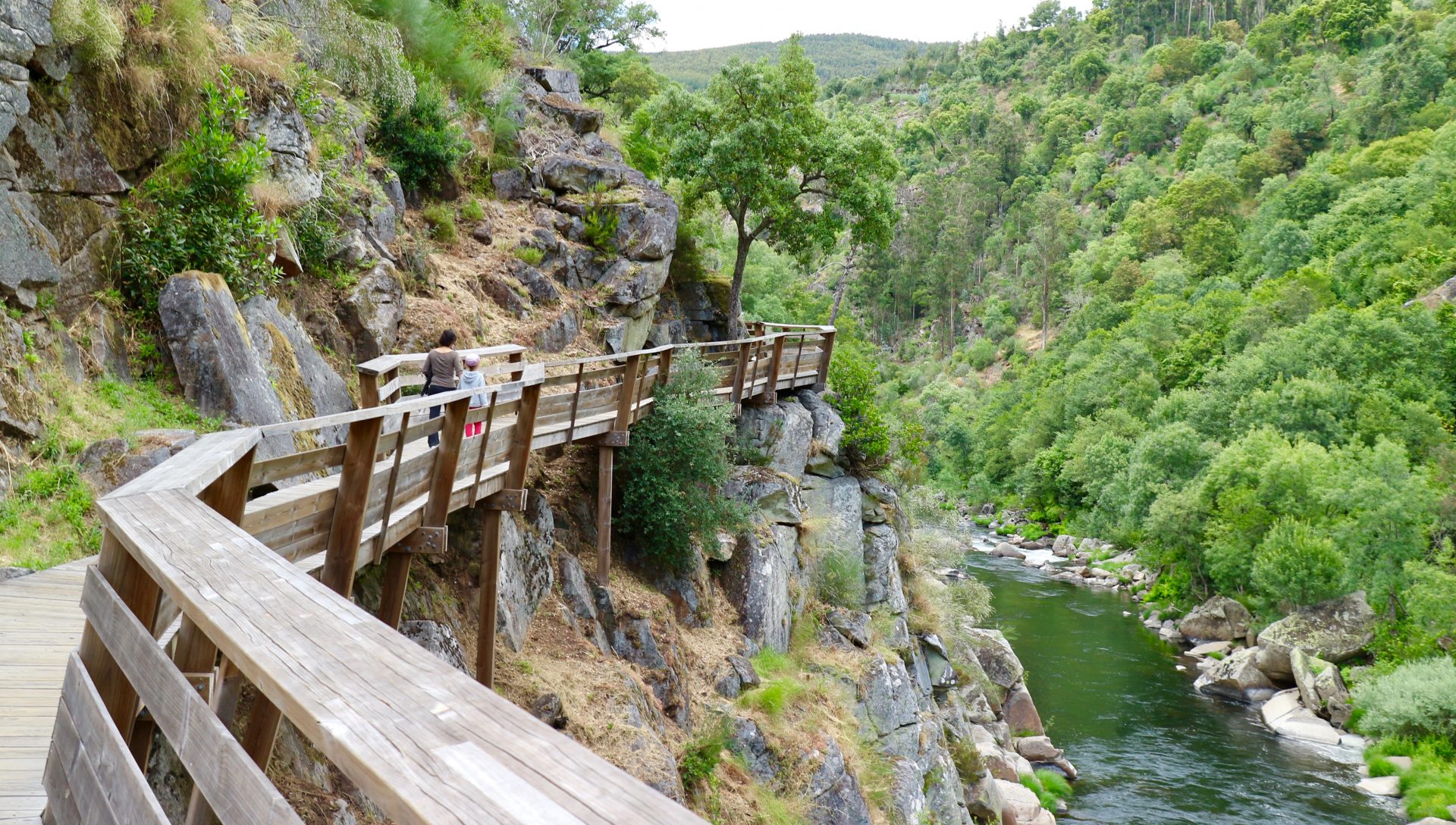 Over 8.5 km long, Passadiços do Paiva takes you through Serra da Freita

For some years now, we have been hearing about this unusual hiking adventure near the Douro valley in the north of Portugal. It is unusual because hiking in Portugal is not as popular as it is in Northern Europe. This may be astonishing, but once you have hiked through Portuguese forests in the summertime, you will understand the widespread lack of interest, as heat and a lack of shade are your permanent companions on every hike. Thus, many peaks in Portugal are reached by a road rather than by a hiking trail. Nevertheless, it is possible to have wonderful walks in this country, especially in the many mountains of northern Portugal, if you’re not just around in summer.

A magnificent dark green dragonfly with big blue eyes buzzes by a few meters away. Diagonally above us flies a greenish brown serin, which recites its beautiful song with great enthusiasm. In the distance, goats moan as they have for millions of years without any interruption; it’s the distinct noise of Paiva.

The Passadiços do Paiva are no longer a secret tip within Portugal. They have been winning the prestige prize for the most innovative European tourist attractions (World Travel Award) for 4 years in a row, and since they fell victim to a forest fire in 2017, they have at last become well known nationwide in the Portuguese media. At a height of 175 metres above the river and 516 metres long, one of the largest pedestrian suspension bridges in the world is currently being built over the Paiva valley. However, the two concrete suspensions that were necessary and that were visible from far seemed to us to be rather strange. The bridge is scheduled to open in 2019.

On a long weekend in June, which is only a long weekend in the capital due to Lisbon’s city saint, we set off northward and rented a very nice, small holiday home in the Douro valley. From there, the journey was comparatively short, with approximately one hour of winding roadway through the Serra da Freita. The parking area at one of the trailheads, the river beach Areinho, is generously laid out but was still relatively full on this weekday. Right next to it, there is a nice beach bar where you can easily delay the beginning of your hike a little longer.

A small path then leads downstream, and after a few metres you can already see the impressive wooden staircase construction, which breathlessly transports hikers to the highest section of the route. This first ascent is exhausting, but quite comfortable. From here, you can also see the destination of the suspension bridge on the opposite side of the valley and imagine how much courage a bridge crossing here will soon require.

We walked comfortably past a grazing herd of goats and climbed down the wooden footbridges and stairs into the valley, into a section without roads and villages that is trapped between steep slopes, rocks and river. But it was hardly dangerous; in fact, it was quite comfortable.

Next, we hiked kilometre after kilometre, met groups from the opposite direction every now and then, picnicked at the roadside and worried when we were told around 6pm, that we still had not covered half the distance. This point was marked by another pretty river beach (Praia fluvial do Vau) and an inviting suspension bridge that leads to the other side of the river.

A little later, we arrived at the impressive rapids, Gola do Salto, where the Paiva shoots through a narrow rock gate, a place that is often used for whitewater rafting. Here you can look down from a small viewing platform directly above the rapids into the bubbling inferno. Then, in a very relaxed manner, the route continues on quite horizontal paths towards the end of the trail in Espiunca, where another pretty open-air bar welcomes the tired hikers. From here, you can take a taxi back to the starting point.

Unfortunately we did not spot the Iberian wolf and the otter during our hike, but we did spot some pretty birds and a lot of insects. Lia counted more than 36 caterpillars, transported some beautiful stones with quartz inclusions for miles and enthusiastically threw branches into the river. For our (almost) 4-year-old Laura, the trail was too long and too boring, and although she was carried most of the way, she didn’t want to see any ‘bridges’ anymore.

The Arouca Geopark, which includes the Paiva River Valley, was declared a World Heritage Site by UNESCO in 2009 and offers many more adventures for families, hikes, exciting museums and a few very pretty traditional villages. The nearby Douro Valley also has a lot to offer. We spent the following day in the small amusement park, Magikland, which is north of the Douro in Penafiel and offers attractions that are especially great for smaller children.

Tickets:
It is best to buy passes in advance on the Internet, as there is only a limited number per day: reservas.passadicosdopaiva.pt
(From 10 years old – 2 Euro/person)
If the passes are already sold out, some surrounding restaurants can sell more when you’re visiting.

Restaurants accessible from the trail:

How to arrive:
By car to the trailhead (Praia Fluvial do Areínho – this option is more convenient, as you have the most difficult part of the hike right at the beginning).
Taxis bring hikers back to the starting point for approximately 15 euros per trip.

On the way:
The path consists mainly of wooden footbridges and stairs. A light, foldable pram can still be used for at least two thirds of the way.

Collecting shells, diving into the waves and a boat trip through the Ria Formosa

Jens, along with his Portuguese partner and 2 daughters, has split his time between Berlin and Lisbon since 2011. The four love to travel, not only through Portugal's diverse landscapes, but also through the Mediterranean, Eastern Europe and the rest of the world.

Bouncy castle fun, car races and a climbing course for the little ones, and a Galão or Vinho Verde for the parents

Sledding, dining with magnificent views and a small walk

Adventurous hike along the Levada on Faial (Azores)